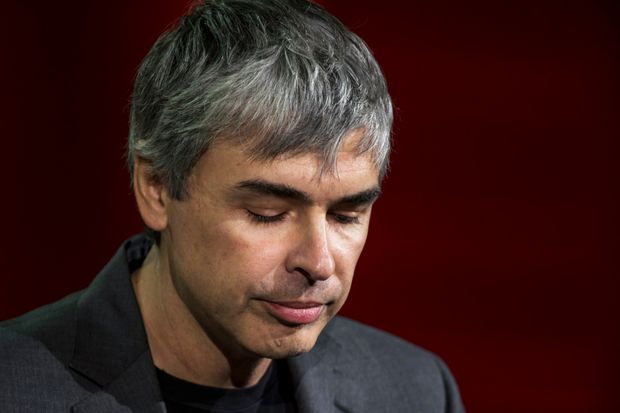 Has anyone seen Google founder Larry Page? Me neither. He’s in the witness protection program of his own doing. Brilliant.

As you chill the champagne ending 2018, the only thing worse this year than owning bitcoin was being the visible face of corporate America, especially technology. It’s the year of the beleaguered CEO, with Facebook ’s Mark Zuckerberg being the poster child under the caption “Mamas, don’t let your babies grow up to be CEOs.”

Whenever I meet chief executives, whether they’re fresh-faced startup founders or grizzled managers of public companies, I remind them there are only two rules for being successful. The first is pretty easy: Don’t run out of money. Ever. Former General Electric CEO John Flannery now knows this. Elon Musk might be whistling past this graveyard again as Tesla’s batteries run low.

And the often neglected second rule of CEO success? Hire a solid No. 2—but not for the reason you think. Sure, a competent operating person would be nice, to offload some of the drudge work. But the real purpose is to serve as a heat shield—someone to roll out front when the villagers with torches and pitchforks show up at your door. Bluntly, someone to take the blame when things go sideways, or even fire so your board doesn’t fire you. What could be more important?

In October 2015, Sundar Pichai became CEO of Google. But really, he is CEO in name only. Mr. Pichai runs a division of Alphabet, a holding company that contains Google (which accounts for 99.6% of Alphabet’s revenue) and a bunch of hemorrhaging “Other Bets.” Mr. Page is CEO of Alphabet, a heat shield between himself and trouble.

Mark Zuckerberg obviously didn’t get the memo. Sure, he hired a competent No. 2 in leaner Sheryl Sandberg. But after the Cambridge Analytica customer data fiasco and Russian election “meddling” and Soros targeting and data leaks du jour, Mr. Zuckerberg took the heat and refused to blame Ms. Sandberg. Their vice president of public policy eventually threw himself under the bus, but mostly because he was leaving anyway. But his is too low a profile. No one is satiated, and the flame is still turned up high. Let’s see if Ms. Sandberg makes it through 2019.

With Steve Ballmer in place, Microsoft ’s Bill Gates stepped down as CEO in 2000 to focus on “software strategy,” though I’m sure he still made the big decisions. Wall Street is famous for creating co-heads of various divisions. But usually one gets stabbed in the back by the other well before they can be blamed for anything useful.

CBS chief Les Moonves, $120 million poorer because of sexual-harassment allegations, would go to investment conferences and roll out his entire management team to give a short update about each division. Investors loved it, thinking Mr. Moonves a great delegator to put such a smart group in control. But really, Mr. Moonves was merely introducing Wall Street to his fall guys, raising their visibility for when he needed to blame them for missing numbers—the same reason U.S. presidents have huge cabinets.

You can even rent scapegoats. That’s what keeps consulting firms in business, isn’t it? Apple took it one step further. Back during the Steve Jobs interregnum, Tim Cook was running around the globe finding partners to make products. But Apple owned a bunch of U.S.-based factories. Rather than close them and face the wrath of laid-off workers and the press, Apple sold the factories to contract manufacturers like SCI Systems and bought finished products from them for a few years. When the factories were inevitably shuttered, the new owners got blamed—Apple was long gone. Missing this lesson: Mary Barra at General Motors , who’s getting shellacked for closing U.S. factories.

The era of celebrity CEOs is dumb and frankly dangerous. Ask Travis Kalanick at Uber, with no one to blame as controversy swirled around the company. Before IBM ’s growth slows again, Gina Rometty might think about raising someone else’s visibility. And Jeff Bezos? He completely blew it. Everyone associates the Amazon HQ2 search with Mr. Bezos. Amazon received 238 proposals for its second headquarters. Now 236 cities hate him. Worse, even the winners complain, with inevitable headlines like, “New York Taxpayers Are Buying a Helipad for the Richest Man in the World.” Larry Page’s CEO teaching for 2019? Insulation beats aggravation.