PARIS — The solemn boulevards and quiet side streets of the 17th Arrondissement in Paris suggest Jewish life in France is vibrant: There is a new profusion of kosher groceries and restaurants, and about 15 synagogues, up from only a handful two decades ago.

But for residents like Joanna Galilli, this area in northwestern Paris represents a tactical retreat. It has become a haven for many Jews who say they have faced harassment in areas with growing Muslim populations. Galilli, 28, moved to the neighborhood this year from a Parisian suburb where “anti-Semitism is pretty high,” she said, “and you feel it enormously.”

“They spit when I walked in the street,” she said, describing reactions when she wore a Star of David. 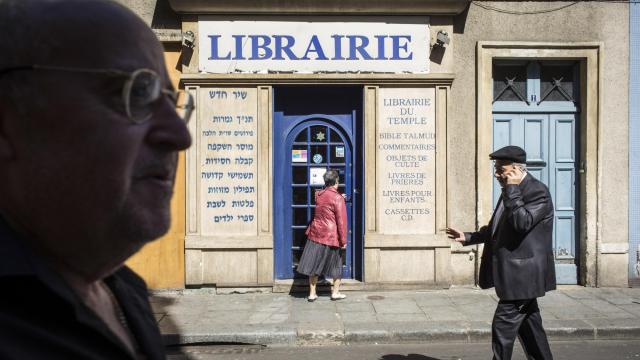 France has a painful history of anti-Semitism, with its worst hours coming in the 1930s and during the German occupation in World War II. But in recent months, an impassioned debate has erupted over how to address what commentators are calling the “new anti-Semitism,” as Jewish groups and academic researchers trace a wave of anti-Semitic acts to France’s growing Muslim population.

Nearly 40 percent of violent acts classified as racially or religiously motivated were committed against Jews in 2017, though Jews make up less than 1 percent of France’s population. Anti-Semitic acts increased 20 percent from 2016, a rise the Interior Ministry called “preoccupying.”

In 2011, the French government stopped categorizing those deemed responsible for anti-Semitic acts, making it more difficult to trace the origins. But before then, Muslims had been the largest group identified as perpetrators, according to research by a leading academic. Often the spikes in violence coincided with flare-ups in the conflict between Israel and the Palestinians, according to researchers.

For the French government, the issue is deeply complicated, touching on the country’s rawest political nerves, as well as ethnic and religious fault lines. France has Europe’s biggest population of both Jews and Muslims, and Muslims face both discrimination in employment and in their treatment by the police.

French leaders fear pitting one side against the other, or even acknowledging that a Muslim-versus-Jew dynamic exists. To do so would violate a central tenet of France — that people are not categorized by race or religion, only as fellow French citizens, equal before the law.

“We are all citizens of the republic, one and indivisible. But this doesn’t correspond to reality,” said a pollster, Jérôme Fourquet, who along with a colleague, Sylvain Manternach, wrote a recent book, “Next Year in Jerusalem, French Jews and anti-Semitism,” published by the respected Fondation Jean-Jaurès, a think tank associated with the Socialist Party. 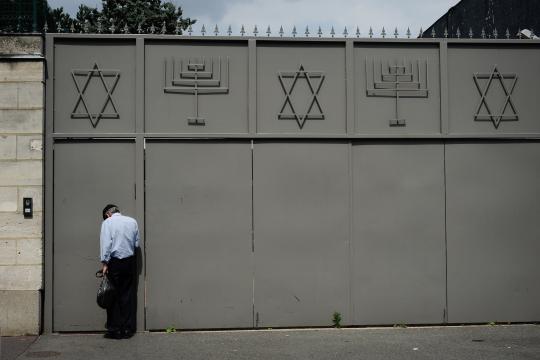 “All the politicians speak of living together,” Fourquet said. “And yet, instead, we have de facto groupings based on culture and community. Yet to recognize this is to recognize the failure or breakdown of the French model.”

Gunther Jikeli, a German historian at Indiana University who conducted a meticulous study of Muslim anti-Semitism in Europe, called the phenomenon “blindingly obvious” in a recent opinion piece in the newspaper Le Monde.

In 16 surveys conducted over the last 12 years in Europe, “anti-Semitism is significantly higher among Muslims than among non-Muslims,” Jikeli wrote.

“There is a kind of norm of anti-Semitism, of viewing Jews negatively,” he said in an interview.

Muslim leaders in France express outrage over the accusations. They dismiss the detailed findings of the researchers and argue that the “new anti-Semitism” catchphrase wrongly places broad-brush blame on the country’s Muslims — and at a time when anti-Muslim bigotry is rising in France and elsewhere in Europe.

Like the reported acts of violence against France’s 500,000 Jews, hate crimes against France’s estimated population of 6 million to 10 million Muslims also increased between 2016 and 2017. Many French Jews have voted with their feet. More than 50,000 have moved to Israel since 2000, compared with about 25,000 French Jews who left between 1982 and 2000.

Tens of thousands of others have left the peripheries of Paris and Lyon, where Muslim populations are rising, and have retrenched in neighborhoods with larger Jewish populations.

In June, four French Muslims of African descent went on trial over the 2014 attack and robbery of a young Jewish man and his girlfriend. Sitting in a glassed-in box, the defendants listened mutely as the judge read the charges, including bursting into the couple’s apartment in the Paris suburb of Créteil and throwing religious objects on the floor. One was reported to have shouted, “Jews don’t put their money in the bank!”

“The pain is coming back,” one of the victims, Jonathan Ben Arrousse, 25, told reporters outside the courtroom after the trial opened June 26. During the attack, he was bound and gagged while his girlfriend was raped in another room. Reliving the assault, he said, was “very difficult.”

The Créteil trial comes barely three months after the killing of an 85-year-old Holocaust survivor, Mireille Knoll, in her Paris apartment by an assailant who shouted “Allahu akbar.” Protesters poured into the streets of Paris.

A manifesto signed by a former president, a former prime minister and numerous intellectuals, both Jews and non-Jews, warned of a “silent ethnic purge,” a reference to what Fourquet called the “large-scale phenomenon” of internal migration. The manifesto called on Muslims to renounce what it deemed anti-Semitic verses in the Quran.

Even so, French leaders have been reluctant to utter the term “new anti-Semitism” or to condemn it, out of a sense of caution that critics deem harmful.

“For fear of not setting one community against another, you wind up hiding things,” said the novelist and essayist Pascal Bruckner, a signer of the manifesto after Knoll’s death. In 2014, François Hollande, then the president, was careful to put the Créteil attack in the context of the “struggle against racism” and “discrimination,” though he acknowledged its anti-Semitic character. The investigating magistrate did not, however, and the prosecution changed course only after an outcry from Jewish groups.

Researchers have observed a strong correlation between surges in anti-Semitic acts in France and flare-ups in the conflict between Israel and Palestinians in the Mideast.

Since 2000, when the second intifada, or uprising, began, there has been an “explosion” of anti-Semitic acts in France, rising to 744 at the onset in 2000 from 82 in 1999, according to Fourquet and Manternach. In 2004, a synagogue was burned in Trappes, a Paris suburb with a large Muslim population, as tensions over the intifada remained.

Similarly, during the 2008-2009 war between Israel and Gaza, reports of anti-Semitic incidents rose nearly tenfold in a single month.

The number of anti-Semitic acts have fluctuated over the years since the first sharp increase, dipping to 49 in 2013 and rising as high as 108 in 2014, when a pro-Palestinian demonstration in the Paris suburb of Sarcelles turned violent, with several kosher groceries burned and Molotov cocktails thrown at a synagogue.

As anti-Semitic episodes accumulated, many Jews began to move out of neighborhoods in the greater Paris region that have large Muslim populations.

Ouriel Elbilia, a rabbi in the 17th Arrondissement, said Jews were relocating to the district “because they felt threatened in their neighborhoods.” He added that his brother is a rabbi in Clichy-sous-Bois, northeast of the capital, but that “there are practically no services anymore because the community has emptied out.” On a recent afternoon on the terrace outside Garry Levy’s kosher restaurant on the Rue Jouffroy d’Abbans in the 17th Arrondissement, the tables were filled with men wearing skullcaps, an unlikely sight in the Paris suburbs.

“People want to move to where it is safe,” Levy said. “They want to be in neighborhoods where they can go to the park without being bothered by young Muslims.”

Jewish groups say that wearing a skullcap in public can be dangerous in some heavily immigrant areas, citing that as one reason behind the moves. In many areas, they say, synagogues are closing for lack of members.

“In the last 20 years, entire communities have transferred,” said Ariel Goldmann, a lawyer who leads France’s leading Jewish social services agency. “These places are emptying out.”

For Muslim leaders, the accusations are infuriating.

“People leave because they have reached another economic level,” said Mamadou Diallo, who runs a youth center in Nanterre, a western suburb of Paris. But he and about a dozen other young Muslims seated around a table on a recent afternoon acknowledged having heard anti-Semitic remarks.

“Too many for my taste,” Diallo said.

Ahmet Ogras, president of the French Council of the Muslim Faith, was especially critical of the recent manifesto that intellectuals and political leaders released.

“It wasn’t a manifesto,” he said. “It was a grab bag,” he said, lumping together a call to Muslims to renounce parts of the Quran with assertions of an “ethnic purge.”

“We were shocked,” he said.

He said that Muslim groups were partners in fighting anti-Semitism, and that “you can’t create a ‘new’ anti-Semitism.” Jewish groups have to “stop putting the blame on Muslims,” he said.

“Why don’t they do studies of Islamophobia in the Jewish community?” he added. Rachid Benzine, a French political scientist of Moroccan ancestry, said that some Muslims felt discriminated against in French society, especially around issues of citizenship, and that they believed Jews enjoyed far better treatment.

“What you’ve got to understand is that there is a sort of obsession, fantasized around the position that Jews hold in the French republic, that develops as a kind of resentment, a jealousy,” he said. “And then there is the Israeli-Palestinian conflict, which gives the whole thing its energy.”

Routine expressions of anti-Semitism are easily encountered in the northern Paris neighborhood of Barbès-Rochechouart, closely linked to anger over Israel.

Under the elevated metro tracks in the heavily immigrant neighborhood, at a crowded open air market during Ramadan, Omar Zarikh, a truck driver of Moroccan descent, quickly warmed up to the subject.

“It’s the Jewish lobby that is behind the governments of the Fifth Republic,” he said, amid denunciations of Israel as he shopped for food to break the Ramadan fast. “They hold the power in all the countries of Europe.”

Michel Serfaty, a rabbi, has led goodwill bus tours in Muslim communities in France for more than 10 years, but acknowledged an uphill battle.