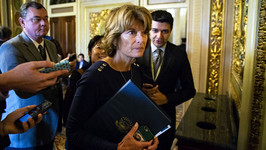 Tom Steyer plans to spend at least $110 million in 2018, making the billionaire investor the largest single source of campaign cash on the left and placing him on a path to create a parallel party infrastructure with polling, analytics and staffing capabilities that stand to shape and define the issues the party runs on in November.

Steyer is building out an operation that’s bigger than anyone's other than the Koch brothers' — and the billionaire and his aides believe the reservoir of nontraditional voters he’s already activated could become the overriding factor in House and other races across the country.

Yet Steyer’s oversize role also stands to position him squarely against Democratic Party leadership, which has shown little appetite for pursuing one of his signature causes: impeachment.

Unlike the $80 million being spent by Michael Bloomberg on House Democratic races, Steyer will put his cash toward building out NextGen America and Need to Impeach, his two growing political organizations, as well as funding clean-energy ballot initiatives in Arizona and Nevada. Steyer has already doubled his initial $20 million investment in Need to Impeach to $40 million and has not ruled out adding more.

Steyer already dropped over $5 million into his For Our Future PAC, and he is expecting more outlays on behalf of individual candidates — such as the $1 million he put behind Florida gubernatorial candidate Andrew Gillum — though likely not in any of the remaining primaries.

Between the two organizations, he’ll have close to 1,000 people on staff, in addition to over 2,000 volunteers. The Need to Impeach email list alone has already topped 5.5 million, which its research — anyone who signs up with the effort has their information run through a series of voter files and other databases — shows includes a very exact 697,780 infrequent voters in the 63 most competitive House districts.

“Our list is bigger than the NRA’s — and we’re going to make sure that it votes that way in 2018,” said Kevin Mack, lead strategist for Need to Impeach.

Your guide to the permanent campaign — weekday mornings, in your inbox.

By signing up you agree to receive email newsletters or alerts from POLITICO. You can unsubscribe at any time.

In just the past decade, Steyer skyrocketed to become the Democratic Party’s biggest donor, only to leave that behind to invest instead in his own organizations and causes, to the irritation of party leaders — particularly those who worry that he’ll hurt them politically by talking up impeachment. That pushback seems to encourage him, while also encouraging talk that he’s interested in a 2020 presidential run, though he tends to push back on that by pointing out that many people first interpreted his spending in this cycle as the prelude to a 2018 campaign for California governor or senator.

Most of those voters, based on their analyses, skew older and female, while the NextGen America effort is focused on younger voters in 11 states that are likely to be important both in 2018 and 2020.

Those voters and others, according to new internal polling and focus group data commissioned by Steyer and described by people familiar with its findings, are very eager to hear Democratic candidates talk more about impeaching President Donald Trump. Just 32 percent of Democrats said they want their candidates to avoid the topic, while 59 percent said that they don't want Republicans dictating the terms of the campaign “so of course Democrats should talk about impeaching Trump if the Democrats win big in November," as the poll question puts it.

“There’s all this concern in Washington that impeachment is going to rile up Republicans, but our numbers show the opposite. … It’s time to get past the establishment talking points and get to what’s really going to win elections,” Mack said, urging Democrats not to avoid impeachment “in fear of bothering 21 percent of Republicans who aren’t going to vote for us anyway.”

Need to Impeach is rolling out an extensive electoral plan, from having its most committed volunteers write postcards to other voters (which they are tracking through smart codes) to going in hard on field organizing, emails and phone calls. Steyer will continue to air ads through November pressing the issue in an organization where the expectation is that each buy is at least $1 million.

Meanwhile, NextGen America is expected to hit 750 people on staff, with a heavy concentration on 400 college campuses, completely focused on turning out young voters, many of whom haven’t voted before and don’t tend to get as much attention as more regular and reliable voters. After a separate set of polling identified “strength in numbers” as the most effective message for voters under 40 (both those who identified themselves as pessimistic and optimistic about the future of the country), the organization has invested in digital ads and peer-to-peer messaging to press that point.

NextGen points out that in its efforts in last year’s Virginia governor’s race, young voters who were activated by the organization were twice as likely as their counterparts to vote, and the time since then has been about expansion, outreach and analytic testing of both their message and tools.

“There’s a lot of talk of young voters this cycle, but not a lot of action,” said Heather Hargreaves, executive director of NextGen.

As an example of their combined potential, Steyer’s aides point to the open race in the Florida House district being vacated by GOP Rep. Ileana Ros-Lehtinen, one of Democrats’ top prospects. Ros-Lehtinen's margin of victory in 2014 was 28,156, and the aides say that in that district alone they have 67,001 targeted young voters through NextGen America, 10,285 signers of the Need to Impeach petition that they’ve matched to voter lists, and 48,000 targets through For Our Future.

Steyer, Mack said, is “a billionaire who believes in return on investment.”