« HOW THIS CASE IS ALMOST ENTIRELY ABOUT BRIBERY - FRIENDS AND CONNECTIONS: THE AMAZING JANE »

FRIENDS AND CONNECTIONS: Dick Contino - The Accordion King Of Fresno 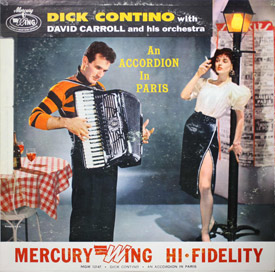 He graduated from Fresno High School in 1947 and enrolled at Fresno State College, but was unable to concentrate on his studies, explaining, "I enjoyed college, but while attending classes I kept thinking that if I was going to be a success, it would be my music that would take me there."

Contino got his big break on December 7th 1947, when he played ‘Lady of Spain’ (his signature piece) and won first place in a talent contest in Fresno, which was broadcast on national radio. Contino's song ‘Yours’ was his first hit single, number 27 in the American pop charts in 1954. 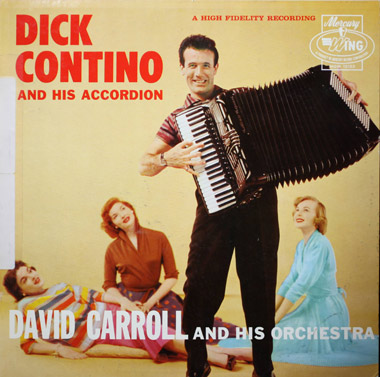 Contino toured with the Horace Heidt Orchestra and was billed as the "world's greatest accordion player." Also an actor and a singer, he became a well-known accordion soloist and appeared on the Ed Sullivan Show on national TV a record 48 times, and also appeared in several cinema movies. In his early career he was often referred to as “the Rudolf Valentino of the accordion”.

Contino’s career in music was interrupted when he was drafted during the Korean War, which involved some personal controversy and unfavourable publicity that for a while threatened his career and reputation. He recovered from this period, and went on to re-establish himself as a popular entertainer.

Contino married the actress Leigh Snowden in 1956, and they had 5 children, and they remained together until she died from cancer in 1982. Son Pete Contino has enjoyed a successful career in his own right as an accordionist and singer.

Dick Contino made many excellent recordings, and was a frequent headline guest at accordion festivals around the USA, becoming a highly respected ‘elder statesman’ of the current accordion scene.

He passed away on April 19th at the age of 87, and is widely mourned.

The Accordion. An instrument sometimes marred by a strong negative stigma, countless jokes, and a sea of looks when one plays that spill “You play…. Accordion….Why?” But this was not the case in the 1940’s and 50’s. The Accordion was of the Most popular instruments to play across the United States, to the point where even during its downfall in the early 60’s, there was an Accordion / Guitar duel-purpose magazine; something unimaginable today.

This immense success was largely due to the achievements of one single accordionist whom woman wanted, and men wanted to be. A showman of the stage whom appeared on the Tonight Show of its day, “The Ed Sullivan Show”, a staggering 48 times. That is in fact, more than the Beatles did.

This fame began when he won the very first of a new talent segment on the famed Horace Heidt Show. It was December 7th, 1947, the day the accordion changed forever in the USA. His name – Dick Contino. For the next 4 years, Contino would date famous actresses, have his own TV show, act in movies, and have his name in large letters at famous theaters over smaller letters that read famous names like Dean Martin and Jerry Lewis.

I was incredibly fortunate to closely know Dick from when I was 12 years old, made possible by my “Don’t take No for an answer” father who got us all to have dinner in Las Vegas one day. I cherish the pictures from that night, and they sit in view from where I do my practicing today. 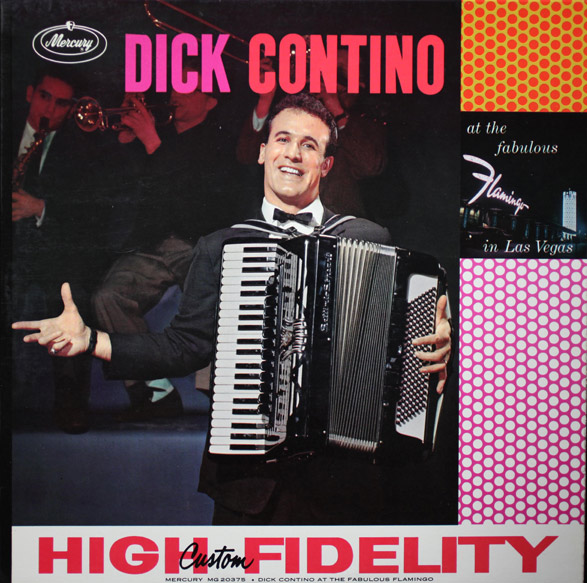 It was around this time where I was becoming sure enough of myself and my playing, to know I had something special within me. The ceiling was not just another top accordionist, it was more.

Coupled with this, my longstanding battle with the accordion world was well in full force by then, and I saw myself as a rebel on multiple fronts. No one believed in what I felt outside of my teacher and my family, which of course doesn’t count for anything since they’ll always believe in you.

President Clinton had my back as well, but he didn’t know Steve Dominko from Lawrence Welk. I needed assurance from someone who had nothing to gain by saying it. Dick was the one, and the quotes he gave me so early on have been my most cherished. A Rebel who did not get along with the accordion world, didn’t believe in the same rules and regulations, and just forged his own path. I saw myself in him from a different generation, and that confidence he gave, played a vital role in any challenges I ever faced. Additionally, his longstanding friendship assured it.

Now everyone of course knows that Dick Contino was not anywhere near Coupe Mondiale level for playing ability, whether he was trying to be or not. And he knew it. But this here, has always been the foundation for the rift between the accordion world and Dick Contino. “He didn’t deserve his fame, it should have been Frosini, Galla-Rini or X, Y, Z.” Trust me, I’m always one strongly fighting for actual ability over showmanship and marketability, but one cannot sit and sulk today about how the accordion remains unpopular, and then be angered about the one person that did make it truly popular.

A beggar, cannot be a chooser, and with it, no one can deny Dick’s still unbeaten charismatic stage presence and ability to culminate what technical talents he did have, into a captivating show that did to audiences what Elvis did to his audiences. 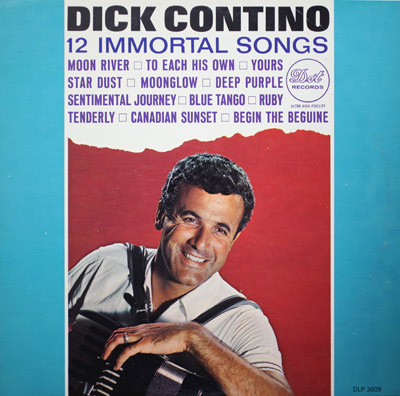 Furthermore, Dick is not only an inspiration to me; he IS in fact, the reason I play accordion. I of course only play because my father wanted me to, and he only played because he became so overwhelmed with excitement after seeing Dick Contino time and time again on television, and live in Las Vegas in the 50’s as a child.

I am a man of statistics, and I would truly love the exact numbers, but I can say this; When I was last in Castelfidardo, Italy, 2 officials at one of the longstanding accordion manufacturers told me “When the accordion was the #1 export of Italy in the 1950’s, approximately 60% of that was going to the USA, and 80% of that 60%, were sales directly due to Dick Contino’s success and popularity.” So yes, forget the USA, an argument could be made that Castelfidardo’s heyday, was also largely due to this one man.

The great and powerful accordion schools of the past which had 1000’s of students in various locations across the US can confidently say they produced all the students to make the instrument popular. Absolutely. But without an inception in a human’s mind, there is no driven interest to learn.

Dick Contino gave that interest in the 4 year run of high profile fame he had, and in his continued performances to full audiences into his early 80’s. Again, I don’t have the exact numbers, and with Dick’s passing I will begin to look into this, but I can tell you, across my career, with total honesty and confidence, that every other person I meet who comes to talk about the accordion with me, played it or had interest in the instrument, mostly, because of Dick Contino and interestingly, not because of Pietro Diero, or Charlie Magnante, or the Coupe Mondiale events, or the main accordion organizations’, who all push to attain interest in the accordion and have done so over many decades.

As I type this, just hours after Mr. Contino has passed away, still processing the news, my dear friend and accordion devotee Dr. Ian Fries texted me, and might have summed it up best, “A staff of music is quiet tonight of which we once all enjoyed hearing.”

The Contino tree, is still bearing fruit, and his fingerprints are all over accordion fans today whether they know it or not.

I’ll miss you so much Dick. The entire accordion world all will.

https://www.nytimes.com/2017/04/30/arts/music/obituary-dick-contino-accordion-heartthrob.html
Apr 30, 2017 · Dick Contino, whose energetic accordion playing and movie-star looks made him a teenage star in the late 1940s, but whose celebrity ebbed after he was imprisoned for evading induction into the ...

https://en.wikipedia.org/wiki/Dick_Contino
Contino was married to Leigh Snowden;for 26 years. The love of his life. they had three children together. They lived in Las Vegas. Novella and other fictional works. James Ellroy wrote a novella, Dick Contino's Blues, which is a mini

www.accordions.com/memorials/mem/contino_dick/
Dick Contino is a famous American accordionist and singer. Dick Contino was born in Fresno, California January 17th, 1930. He studied accordion primarily with San Francisco-based Angelo Cognazzo, and occasionally with Los Angeles-based Guido Deiro and was destined to become, one of the most famous American accordionists of all time.

https://accordionamericana.com/2016/05/31/the-extraordinary-dick-contino-accordionist/
Born in Fresno, California in 1930, Dick Contino was a precocious child with parents dedicated to his success, from the beginning. The Continos (his father was an accomplished accordionist), recognized their son's talent from an early age and for years, drove him 180 miles each week for accordion lessons in San Francisco.

https://www.allmusic.com/artist/dick-contino-mn0001202666/biography
Dick Contino is remembered today for his performances in notoriously (and, one might add, enjoyably) bad movies such as Daddy-O (1959) and The Beat Generation (1960). But for about three years, from 1948 until 1951, Contino was a star attraction as a musician, earning 4,000 dollars a night.

https://www.youtube.com/watch?v=vRr0fKpXxcI
Without argument, the most exciting accordion player to ever walk the earth, Dick Contino, making one of his appearances on the Ray Anthony Show back in the 50's and playing his trademark, Lady Of ...

https://www.reviewjournal.com/entertainment/accordions-hep-cat-dick-contino-dead-at-87/
Dick Contino, a Las Vegas lounge mainstay and the man who made the accordion hip in the 1950s, died Wednesday in his native Fresno, California. He was 87. Starring in the 1958 B-movie "Daddy-O ...

https://www.dickcontino.net
Dick passed away peacefully at St. Agnes Medical Center with his wife by his side. Born on January 17, 1930, in the family home adjacent to Kearney Boulevard, Dick grew up surrounded by a very loving family. He attended St. Alphonso's School and Church where he served as an alter boy.

Lady Of Spain - Dick Contino At The Fabulous Flamingo

« HOW THIS CASE IS ALMOST ENTIRELY ABOUT BRIBERY - FRIENDS AND CONNECTIONS: THE AMAZING JANE »