« FACEBOOK PROVEN TO BE THE WORLD'S BIGGEST - THE PRIME SUSPECTS »

Listen to the Article! 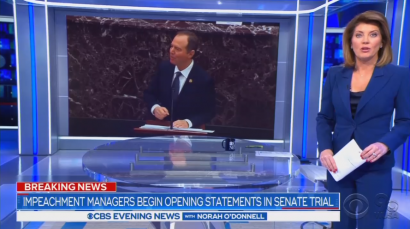 Before the Senate impeachment trial of President Donald J. Trump was gaveled into session, Chief Justice John Roberts presided over a swearing-in ceremony where all 100 senators pledged to be impartial jurors. The liberal media zeroed in on that pledge and decried Senate Republicans who seemed to be siding with the President.

But a Media Research Center study of broadcast evening news coverage of the opening arguments of both sides, found ABC, CBS, and NBC did not live up to the standard they demanded of Republicans. They gave Democrats double the airtime and showered their arguments with mostly praise, while expressing only criticism of the President’s legal team.

Between Wednesday, January 22, when Democratic House impeachment managers launched their opening arguments, and Tuesday, January 28, when the President’s defense team rested, evening newscast reporters and anchors made a total of 34 evaluative statements about the merits and effectiveness of both sides.

Democratic impeachment managers received a total of 21 evaluative statements from ABC, CBS, and NBC journalists. Of that total, 95 percent of those (20) touted their efforts and presentations, which means only one of their evaluative comments were negative. ABC’s World News Tonight had eight positive comments, CBS Evening News had five, and NBC Nightly News seven. NBC had the lone negative comment. 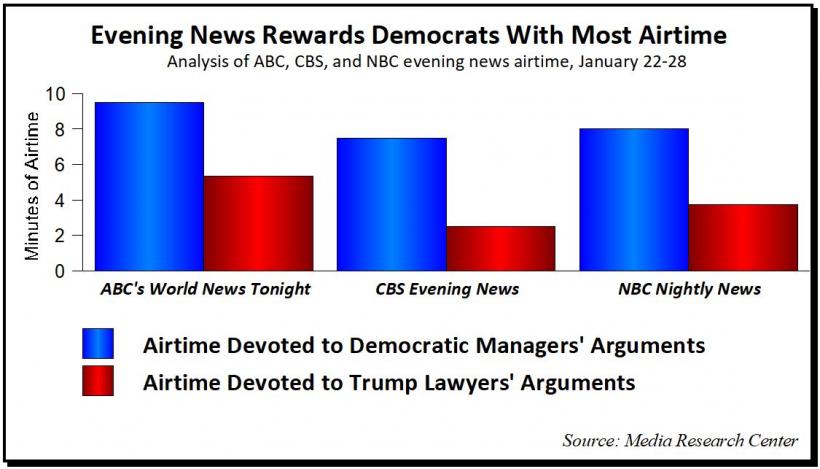 In stark contrast, every evaluative statement from reporters and anchors about the merits and effectiveness of Trump’s defense team were negative. Of the 13 total statements, ABC and CBS each had five with NBC pitching in with three.

The networks would roundly tear down the arguments Trump’s legal team was making despite the evidence they would present. When Trump lawyer Michael Purpura argued with evidence that the President was long interested in burden-sharing when it came to Ukraine’s defense, CBS chief congressional correspondent Nancy Cordes tried to shoot it down by saying, “Those claims run counter to witness testimony.” A common assertion by the networks.

After the manuscript of former National Security Advisor John Bolton was leaked, Holt announced that the book “contradicts his defense.” Moments later, NBC chief White House correspondent Hallie Jackson seemed to poke at how Trump’s lawyers were addressing senators by not “the elephant in the room.” 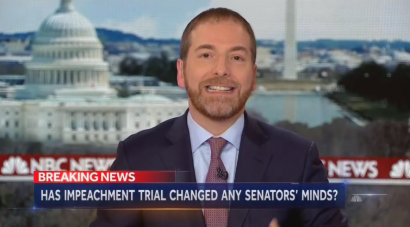 On day one on the Democratic arguments, they roundly praised how prosecutors were using the words of the President’s defenders against him. “But Chairman Jerry Nadler tried to dismantle that argument using one of the President’s top defenders to make the case,” said ABC senior congressional correspondent Mary Bruce. CBS Evening News anchor Norah O’Donnell echoed: “House managers laid out their case to remove Mr. Trump from office, at times using his own words against him.”

NBC Nightly News anchor Lester Holt opened the segment for day two of Democratic arguments by suggesting they were “painting a damning portrait of the President.”

The lone negative evaluation for Democrats came from NBC News political director Chuck Todd on Saturday, January 25, when he shared his frustrations with how the managers seemed to be unable to convince Senate Republicans to vote for more witnesses:

You don’t really any shifts. And if anything, I think before this trial began, I thought they had a good shot at getting witnesses and maybe at least extending this a little bit … I think it’s pretty clear that Mitch McConnell has convinced them … it’s not worth it.”

Along with that heavy praise for House impeachment managers came a sizable boost in the amount of airtime allowed for their side. More than double, in fact.

In all, the networks covered the Democratic managers for almost 25 minutes (24:57). That’s compared to the 11 minutes and 34 seconds they gave to President Trump’s defense team. The most wildly imbalanced was CBS Evening News, which gave seven minutes, 42 seconds for Democrats and skimped on Trump’s team with two minutes and 26 seconds.

ABC gave Democrats the most time at nine minutes, 25 seconds. Contrast that with the five minutes and 21 seconds they gave the Trump team. NBC allocated seven minutes, 50 seconds for Democrats, while giving three minutes, 47 seconds to the defense.

With the liberal media’s demand that Republicans be impartial in hearing the case, it was clearly more of a ‘do as I say, not as I do’ suggestion.

https://www.forbes.com/sites/katevinton/2016/06/01/these-15-billionaires-own-americas-news-media-companies/
Jun 1, 2016Several other billionaires, including Comcast CEO Brian Roberts and Liberty Media Chairman John Malone, own or control cable TV networks that are powerful but not primarily news focused.

Independent Lens . DEMOCRACY ON DEADLINE . Who Owns the Media?

www.pbs.org/independentlens/democracyondeadline/mediaownership.html
In 1983, 50 corporations controlled most of the American media, including magazines, books, music, news feeds, newspapers, movies, radio and television. By 1992 that number had dropped by half.

These 6 Corporations Control 90% Of The Media In America

The 6 Companies That Own (Almost) All Media [INFOGRAPHIC]

https://www.webfx.com/blog/internet/the-6-companies-that-own-almost-all-media-infographic/
News Corp is the media conglomerate best known for its line of Fox companies. Those include Fox News, FX, and pretty much every other company with the name "Fox" in it. The company generated more than $33 billion in 2012, and it controls a huge number of print products compared to other media conglomerates.

Who Owns the Media? | Free Press

https://www.freepress.net/issues/media-control/media-consolidation/who-owns-media
Massive corporations dominate the U.S. media landscape. Through a history of mergers and acquisitions, these companies have concentrated their control over what we see, hear and read. In many cases, these companies control everything from initial production to final distribution. In these interactive charts (xlsx) we reveal who owns what.

Chart: These 6 Companies Control Much of U.S. Media | Fortune

https://fortune.com/longform/media-company-ownership-consolidation/
Traditional media giants are racing to consolidate in the face of tech industry disruption. Can they retain control of the medium and the message? Welcome to Hollywood, AT&T. The company that most people associate with mobile phones entered show business in June when a U.S.

Behind the Scenes, Billionaires' Growing Control of News ...

https://www.nytimes.com/2016/05/28/business/media/behind-the-scenes-billionaires-growing-control-of-news.html
May 28, 2016And long before Mr. Murdoch, there was one William Randolph Hearst, who defined what it meant to be a media mogul. But there is a difference between Hearst and the many billionaires who are trying to control today's news media, said David Nasaw, the author of the great Hearst biography "The...

7 Things About The Mainstream Media That They Do Not Want You ...

https://www.infowars.com/7-things-about-the-mainstream-media-that-they-do-not-want-you-to-know/
May 21, 2013#4 The Mainstream Media And The Politicians That They Worship Hate The Fact That They Cannot Control Internet News Sites In the old days, the mainstream media had a virtual monopoly on the news. But these days, anyone with an Internet connection can put up a news site, and this is driving the establishment absolutely bonkers.

31 Quotes That Will Change The Way You View The Media ...

https://thoughtcatalog.com/christine-stockton/2013/06/31-quotes-that-will-change-the-way-you-view-the-media/
The media's the most powerful entity on earth. They have the power to make the innocent guilty and to make the guilty innocent, and that's power. Because they control the minds of the masses. Malcom X I spent my time drinking and staring at a television in the airport bar.

Who owns the media in France? | RSF

https://rsf.org/en/news/who-owns-media-france
Dec 8, 2017Who owns the media in France? This apparently simple question is actually very complex, according to the findings of this survey, which was carried out for RSF by Julia Cagé, a specialist in media economics.

Shadow Government | Who Rules America? Who Controls the U.S ...

www.sweetliberty.org/issues/shadow/jewishmedia.htm
Oct 25, 2001Who Controls The U.S. Media? There is no greater power in the world today than that wielded by the manipulators of public opinion in America. No king or pope of old, no conquering general or high priest ever disposed of a power even remotely approaching that of the few dozen men who control America's mass news and entertainment media.

How five American companies control what you think — RT Op-ed

https://www.rt.com/op-ed/158920-us-ukraine-media-control/
The explanation is surprisingly simple: There aren't numerous US mass media news sources at all; there are just five. Five giant corporations control 90 percent of US mass media. And direct links connect all five of these media conglomerates to the political establishment and the economic and political power-elites of the United States.

https://www.blacklistednews.com/Media_Now_Openly_Admitting_The_Government_Controls_The_News/26077/0/38/38/Y/M.html
The media's reporting on the scandals has provided the public insights into the operations of the incestuous relationship between the press and the government. Such revelations clearly suggest the corporate media is telegraphing to the public the American government has just gone way too far out of control.

Zionist control of the media: Who rules America?

https://www.stormfront.org/jewish/whorules.html
There is no greater power in the world today than that wielded by the manipulators of public opinion in America. No king or pope of old, no conquering general or high priest ever disposed of a power even remotely approaching that of the few dozen men who control America's mass media of news and entertainment.

Media of the United States - Wikipedia

https://en.wikipedia.org/wiki/Media_of_the_United_States
Currently, five corporations control roughly 90% of the media. [2] [3] Critics allege that localism , local news and other content at the community level, media spending and coverage of news, and diversity of ownership and views have suffered as a result of these processes of media concentration.

https://thezog.wordpress.com/who-controls-the-news-part-1/
It matters that the Judaists (commonly referred to as "Jews") control the media (and the govt.) because they have an ulterior motive-to destroy American by inciting the alien invasion, pornography, miscegenation, homosexuality and pushing laws to imprison Christians and gain power through the divide and conquer strategy.

Does the Media Have a Liberal Bias?

https://www.thebalancecareers.com/is-the-media-liberal-2315202
The media misconception that some people including politicians try to convey is that in media companies across the country, there are secret meetings that take place, where reporters are given orders on how to slant the news so that there's a liberal political benefit.

https://www.tutor2u.net/sociology/reference/who-owns-the-uk-media
The term media mogul refers to an individual who owns a significant share of a media company, arguably providing them with significant control over that company's media content. The classic example of a media mogul is Rupert Murdoch, who owns a number of newspapers and TV broadcasting companies around the world.

cosmicconvergence.org/?p=2422
Jul 19, 2012Cosmic Convergence Research Group. This is an extremely important question because whoever does control the Mainstream Media (MSM) does control the world.. However, the stark reality is that it is impossible to know just who it is that controls the MSM from the very peak of the pinnacle of the pyramid of worldly power.

https://www.youtube.com/watch?v=0hxMaAAmaX0
Jun 6, 2013Abby Martin goes over the 6 corporations that control nearly everything in the mainstream media, and discusses a few of the most famous cases of media censorship with BTS producer, Manuel Rapalo.

https://en.wikipedia.org/wiki/Concentration_of_media_ownership
Controls over media ownership in Australia are laid down in the Broadcasting Services Act 1992, administered by the Australian Communications and Media Authority (ACMA). Even with laws in place Australia has a high concentration of media ownership.

WHO OWNS THE MEDIA? - Harvard University

https://scholar.harvard.edu/files/shleifer/files/media.pdf
the consequences of who owns the media.7 The public interest theory predicts that the more "benign" or "public-spirited" governments should have higher levels of media ownership and that the consequence of such ownership is greater freedom of the press, more economic and political freedom, and better social outcomes.

A complete guide to who controls the Russian news media ...

https://www.indexoncensorship.org/2013/12/brief-history-russian-media/
The media were introduced into new realities: the market economy, the end of ideological control of the Communist Party, political pluralism, the development of new public institutions, et al. Fascinated by the seemingly ideal Western model of the press, Russian media borrowed most of its characteristics: freedom of speech, private ownership of ...

https://nypost.com/2017/10/21/the-other-half-of-america-that-the-liberal-media-doesnt-cover/
Oct 21, 2017Gun control and gun rights is one of our most divisive issues, and there are legitimate points on both sides. But media is obsessed with the gun-control side and gives only scant, mostly negative ...

« FACEBOOK PROVEN TO BE THE WORLD'S BIGGEST - THE PRIME SUSPECTS »