Anyone else find it weird that the bloke tasked with probing tech giants for antitrust abuses used to, um, work for the same tech giants?

No, of course not. It's all perfectly fine

By Kieren McCarthy in San Francisco
65 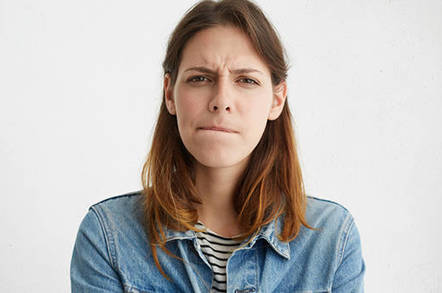 In the revolving-door world that is Washington DC, that conflict may not seem like much but one person isn't having it: Senator Elizabeth Warren (D-MA) this week sent Makan Delrahim a snotagram in which she took issue with him overseeing tech antitrust efforts.

"I am writing to urge you to recuse yourself from the Department of Justice's (DOJ) reported antitrust investigations into Google and Apple," she wrote. "Although you are the chief antitrust attorney in the DoJ, your prior work lobbying the federal government on behalf of these and other companies in antitrust matters compromises your ability to manage or advise on this investigation without real or perceived conflicts of interest."

Warren then outlines precisely what she means by conflict of interests: "In 2007, Google hired you to lobby federal antitrust officials on behalf of the company's proposed acquisition of online advertising company DoubleClick, a $3.1 billion merger that the federal government eventually signed off on… You reported an estimated $100,000 in income from Google in 2007."

It's not just Google either. "In addition to the investigation into Google, the DoJ will also have jurisdiction over Apple. In both 2006 and 2007, Apple hired you to lobby the federal government on its behalf on patent reform issues," Warren continues.

She notes: "Federal ethics law requires that individuals recuse themselves from any 'particular matter involving specific parties' if 'the circumstances would cause a reasonable person with knowledge of the relevant facts to question his impartiality in the matter.' Given your extensive and lucrative previous work lobbying the federal government on behalf of Google and Apple… any reasonable person would surely question your impartiality in antitrust matters…"

Delrahim has also done work for a range of other companies including Anthem, Pfizer, Qualcomm, and Caesars but it's the fact that he has specific knowledge and connections with the very highest levels of tech giants while being in charge of one of the most anticipated antitrust investigations of the past 30 years that has got people concerned.

This is ridiculous, of course, because Delrahim is a professional and works for whoever hires him. It's not as if he would do something completely inappropriate like give a speech outside the United States in which he walks through exactly how he would carry out an antitrust investigation into tech giants and the holes that would exist in such an investigation, thereby giving them a clear blueprint to work against.

Because that would be nuts.

He definitely did not do that. What he actually did was talk about how it was possible to investigate tech giants, despite some claiming it wasn't – which is, you'll understand, quite the opposite.

"The Antitrust Division does not take a myopic view of competition," Delrahim said during a speech in Israel this week. "Many recent calls for antitrust reform, or more radical change, are premised on the incorrect notion that antitrust policy is only concerned with keeping prices low. It is well-settled, however, that competition has price and non-price dimensions."

Instead, he noted: "Diminished quality is also a type of harm to competition… As an example, privacy can be an important dimension of quality. By protecting competition, we can have an impact on privacy and data protection."

So that's diminished quality and privacy as lines of attack. Anything else, Makan?

"Generally speaking, an exclusivity agreement is an agreement in which a firm requires its customers to buy exclusively from it, or its suppliers to sell exclusively to it. There are variations of this restraint, such as requirements contracts or volume discounts," he mused at the Antitrust New Frontiers Conference in Tel Aviv.

Notepad at the ready?

He then noted that companies could use such agreements "to prevent entry or diminish the ability of rivals to achieve necessary scale, thereby substantially foreclosing competition" – and that would be a bad thing.

But wait he's not done taking the tech giants to task just yet. "It is not possible to describe here each way that a transaction may harm competition in a digital market, but I will note the potential for mischief if the purpose and effect of an acquisition is to block potential competitors, protect a monopoly, or otherwise harm competition by reducing consumer choice, increasing prices, diminishing or slowing innovation, or reducing quality. Such circumstances may raise the Antitrust Division’s suspicions," he noted.

Fortunately no one at Google, Facebook, Apple or any other tech giant is incapable of reading words and applying them to their own situation so there is nothing at all to be worried about.

One thing we definitely will not see is the tech giant's lobbyists flooding the US government with information about improved quality, greater privacy and how competition is actually increasing in their markets. Because that could undercut the DoJ's own antitrust case.

Thank goodness we've got hard-working people like Delrahim to point out such things. It's not as if the moment he leaves the DoJ job he's going to get a job as a massively over-paid lobbyist for the self-same tech companies. He's already been there and done that, and for Makan Delrahim, there is no looking back.

In a funny way he reminds us of former footballer and celeb OJ Simpson who definitely did not kill his wife but did subsequently treat us to an entire book that pointed out how he would have done it if he had in fact done it. Which he didn't.

Makan Delrahim is the DoJ's OJ. ®

Just When You Thought Surveillance Tech Couldn't Get Any More Orwellian...

Authored by 'Graywolf' via The Organic Prepper blog,

One of my favorite TV shows was Person of Interest. In that show, a genius programmer was hired by the government to develop an artificial intelligence (AI) computer to tap into and analyze communication feeds and predict activities that may pose a threat. Unfortunately, as you can imagine, things spun out of control; the system that was designed to benefit society was not always beneficial to citizens.

As amusing as it is to watch escapist fiction such as this, it’s not so enjoyable when you realize it’s no longer fiction. China has already developed the infrastructure to envelop their citizens in this protective surveillance net and has begun that slippery slope of using AI to not only catch activities deemed undesired by the government – it’s starting to take action against those observed.

In the city of Shenzhen (and most likely others), when an offender is observed jaywalking via video surveillance, they will publicly humiliate you by showing your face on screens located around the city. Now that’s bad enough but they’re going a step further. Those identified will have their cell phone ‘pinged’ and be sent an immediate fine.

By the way, Intellifusion, the company behind the AI system involved is in talks with WeChat and Seina Weibo (China’s equivalents of Facebook and Twitter).

The surveillance state is expanding, and even children are not exempt.

You may think there must be some kind of check-and-balance system built in to ensure that children would be protected so that they wouldn’t suffer the same consequences as an adult. You’d be wrong.

As you can imagine, this outing of a child in such a public manner has sparked outrage. Instead of backing down on their stance, the police have doubled down and stated that no one is above the law and its draconian reaction. Of course they have. I know if I wanted to start weeding out hidden miscreants, I’d set up exactly this scenario. Guess what’s going to happen to those expressing their discontent.

You may think that all this isn’t so bad because it’s just surveillance out in the street, where people can see you anyway, so what’s the big deal? Well, this is just the beginning. In order to crack down on children playing on gambling sites on their computers, corporations are now starting to institute facial recognition utilizing the user’s webcam. Of course children shouldn’t be gambling but now long until this in-home video requirement expands to include normal, everyday websites such as social media? How long until they convince you it’s much more convenient for you to just use cameras that you can have installed in your home to protect children, assist in gaining you access to what you need, and help you increase your social credit by watching your good deeds at home at the same time?

Surveillance systems are insidious and are finding their way into our homes.

In case you’re one of those ‘careful’ types who wouldn’t allow that kind of nonsense in your home, Huawei and other very large manufacturers of electronics in China and around the world have become big suppliers to China’s security services. All they need to do is develop surveillance systems that help improve our lives at the same time so we actually pay for the privilege. Systems such as Ulo not only watch your home for you, it becomes part of your family. Can you think of other surveillance systems that we’ve now graciously invited into our homes?

What has begun is the dismantling of due process and the systematic expansion of systems that can be mined for data. Not only is every action observed, anything that the program decides is aberrant or not beneficial can now be punished without any intervention or legal protection – and no one is safe.

Now, most likely, you are reading this from a country outside of China, so why do you care? The AI in the fictional TV show based in the U.S., Person of Interest couldn’t ever become a reality, could it? Systems in the U.S. have been able to automatically scan license plates for a while now and alert police to stolen vehicles. Cameras are now on pretty much every intersection in any city in the country and along the highways. The infrastructure to start this kind of surveillance state is already in place. All it would take is to somehow tap into this system with an AI to observe human behavior and perhaps even judge and jury like what’s happening in China. Unfortunately, this is also becoming a reality.

Some surveillance systems can detect concealed weapons and alert authorities.

A company called ZeroEyes has developed a system that can detect and alert the presence of even concealed weapons, resulting in a visual pat-down that only requires a camera in the room. Of course, if this is used to protect a facility that lets you know that entry is tacit approval, that’s one thing. ZeroEyes is already working with school systems and is moving toward a deal with U.S. Customs and Border Patrol.

Another company that is in the weapon-identification game is called Athena, but it has taken this one step further. Not only does their AI detect hidden weapons, it detects and alerts to human behavior itself. It learns how people move and their facial expressions and then decides when someone is acting strangely and alerts the authorities.

How long until they plug these AI systems into cameras all throughout town and even in our homes? How long until these systems start being used in ways that we were assured would not happen? How long until those with criminal or political intentions start using AI and surveillance to coerce behavior and punish those who don’t toe the party line?

Graywolf is a former Counterintelligence Agent and US Army combat veteran. His experience as an agent, soldier and government contractor on assignments around the world gives him a unique perspective on the world and how to deal with it. His website is Graywolf Survival.